With heated rivalries, giant monster trucks, and even bigger personalities, the adrenaline-packed phenomenon that is Monster Jam® is celebrating its 30th anniversary this year.

From humble origins in tractor pulling competitions in the 1970s, to becoming a global phenomenon appearing in over 30 countries, the origin story of this action-packed phenomenon is almost as unbelievable as the high-flying stunts performed during the event.

In this blog, we’ll be delving into the origin story behind Monster Jam and sharing some key facts about this truly unique motorsport.

In case you’re new to Monster Jam, let’s give you an introduction. It’s an adrenaline-fueled event where drivers navigate 12,000-pound (5,443 kilogram) Monster Jam trucks that are engineered to perfection, pulling off impressive stunts such as backflips, two-wheel skills, and racing at speeds of up to 70 miles per hour. Both male and female drivers compete against each other across a number of different disciplines, using physical and mental strength and dexterity to perform gravity-defying skills.

All of this action takes place in front of fan-packed stadiums and arenas across the globe.

How did Monster Jam start?

Although Monster Jam is now a mammoth event attended by millions of people across the world, this unique motorsport came from humble beginnings. The early pioneers of Monster Jam had no idea that these vehicles would prove so popular, or that it would evolve into such a popular motorsport in its own right.

The origins of Monster Jam emerged in the US during the modified truck craze of the 1970s, where heavily modified trucks with oversized tires reaching up to 48-inches became popular. These trucks were used for sports such as mud bogging and tractor pulling.

During the 1980s the monster truck craze truly hit off, and as technology and skills improved alongside a growing fan base, the sport began to develop into what we see today.

What happens at a Monster Jam event today?

At a Monster Jam event today, you will see expert drivers and famous trucks tearing up the dirt and competing in intense competitions of both speed and skills.

There are a number of different disciplines that drivers can compete in during a Monster Jam event, including:

You can check out some of the world record holders for these events via the BKT Network channel here.

Monster Jam is one of the most accessible sports for fans in the world, and this is a huge reason why Monster Jam has become so popular. Fans are put ‘in the driving seat’ of judging and can vote for their favorites during the event. They are also able to interact with drivers and get up close and personal with their favorite trucks during designated ‘Pit Parties’ at the events.

As we’ve already mentioned, Monster Jam trucks weigh an impressive 12,000 pounds. Each truck is approximately 10.5 feet tall, 12.5 feet wide and 17.5 feet long. This means that Monster Jam athletes have to demonstrate a huge amount of skill and expertise to allow these gigantic vehicles to perform tricks such as backflips.

Monster Jam trucks use engines that can generate up to 1,500 horsepower. The sheer power of these vehicles is one of the reasons that Monster Jam has drawn such a loyal following of fans across the world as an adrenaline pumping sport!

Every Monster Jam truck is constructed from fiberglass and is custom built. Over the years, rival trucks have competed to have the most eye-catching designs.

One of the most recognizable features on a Monster Jam truck are the huge tires. In the early days of monster truck events, agricultural tires were used, which were designed to provide flotation and prevent sinking on muddy terrains.

Since its inception, the sport has modernized,and Monster Jam trucks now use specially designed custom tires. BKT tires have been used on all Monster Jam trucks since 2014. The tires used are 66 inches (1.6 meters) in diameter and 43 inches (1 meter) wide. Including the wheel, these tires weigh 645 pounds each.

Monster Jam has gone from humble origins in the USA to events held in locations across the world including Europe, Singapore, Australia, Mexico, Saudi Arabia, Japan, the Philippines and more. But before monster trucks were the highly-engineered state-of-the-art vehicles we see today, they were a passion project for off-road enthusiasts, who never would have predicted that their hobby would turn into a billion-dollar industry. It’s safe to say that Monster Jam will be wowing audiences for many years to come. 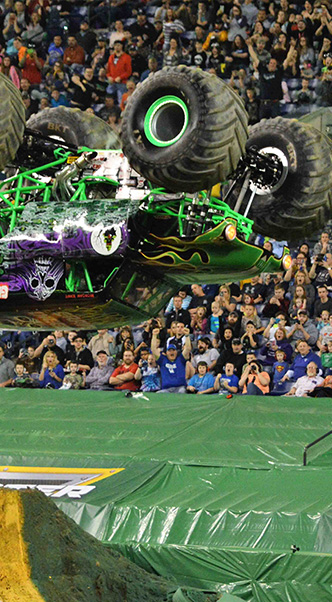