Make way for women in agriculture | How do we overcome the gender gap?

Half of the world’s population consists of women. Yet, women are highly underrepresented in agriculture. The fourth episode of Global Trends explores the gender gap in agriculture and discusses possible solutions.

Did you know? If the female workforce had the same access to resources as the male workforce, agricultural production could increase by 30 percent! This would allow 150 million more people to be fed, making a substantial contribution to the fight against hunger and extreme poverty.
Why are women less represented in agriculture today? This is one of the questions we dived into in the latest episode of Global Trends.

Unfortunately, female workers are often penalized in the agricultural sector. Many female workers do not have adequate access to essential resources and services, such as land, the availability of credit, and training.
As a result of the unequal conditions and opportunities, agricultural businesses run by woman produce up to a third less than those run by men, according to the United Nations Food and Agriculture Organization.
Just imagine how much potential the agricultural sector has, if just the gender inequality is combated!

Diversity can be a competitive advantage

Running a farm includes constant decision-making: everything from choosing the right tire to choosing the right crop. Lucia Salmaso, CEO of BKT Europe, acknowledges the difficulties a woman can face in the sector, especially when it comes to reaching senior, decision-making roles. In the Global Trends episode, she stated that although the situation has improved, women are still today penalized by numerous gender prejudices which hinder women in reaching positions of success:

- Yet, diversity can be a real competitive advantage for companies, essential to generate innovation and growth, and this applies to all sectors, she adds.

Three out of ten agricultural businesses are run by women. These numbers give us an idea of the great contribution made by women to the sector. Svetla Garbeshkova, CEO of Agro TV Bulgaria also joined the Global Trends episode. She states that the development of agriculture without women’s involvement is unthinkable.
- I also believe that women can leverage some skills and characteristics which mark them out, such as the innate propensity for creativity, resilience and ambition to improve the agricultural business, says Garbeshkova.

She tells how in Bulgaria, the contribution of women working in the agricultural sector has proved to be fundamental for the further development and enhancement of local rural areas:
- I think, therefore, it is important to change the purely masculine perception that we generally have of agriculture, she adds.

Also joining the Global Trends episode devoted to the female face of agriculture is Audra Mulkern, founder of the Female Farmer Project, the U.S. multiplatform project which aims to enhance the role of women in agriculture. The project can already point to positive numbers, as women in agriculture represent the fastest growing demographic segment in the United States.
- I must admit that we are making encouraging progress on this front, at least as far as the United States is concerned. We can finally say that the perception of women in agriculture is changing, especially in the new generations who tend to recognize the fundamental role played by women also in this area, says Mulkern.

Want to know more about how to overcome the gender gap, and make gender diversity a competitive advantage? Watch the episode here! 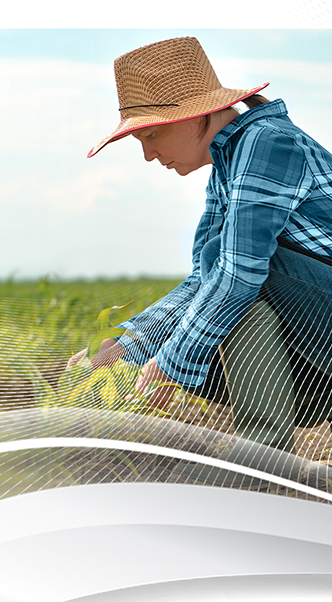