Tractors in Modern Agriculture and Construction

A tractor is a robust engineering development with extra-large wheels, designed to create traction (hence the name) across a variety of different terrains. One of the most important facets of a tractor is its tire, and the specific type of tire needed depends on the job being carried out, and the environment in which the tractor is being used.

Tractors have been an agricultural staple since they first arrived on the scene in the late 19th century. Although tractors as we know them weren’t popularized in mainstream culture until 1917, when Henry Ford began mass-producing the Fordson. Since then, tractors have continued to evolve through technological advancements, paving the way for more efficient operations and meeting the significant growth in agricultural demand head-on.

Despite their strong roots in agriculture, tractors are widely used outside of the agricultural sector, playing an important role in building construction, landscape maintenance, mining, road construction and grounds keeping.

Nonetheless, in this article we explore the use cases of tractors in modern agriculture and farming.

The use of tractors in agriculture

A brief history of the tractor

Farmers Weekly explains how the first tractors began in the late 1880s when petrol engines provided a more efficient and robust alternative than their steam-powered predecessor and led the way for 100 years.

The first tractor on record was built in 1889 by Charter Gas Engine Co, owned by John Carter. Before the innovation behind the rubber wheels we see today, the tires were often made out of steel and had spikes.

It wasn't until the early 1900s that tractors started to gain more mainstream success and developed enough to appeal to farmers and meet their needs better than the predecessor steam-powered portable engines, which had around 200 years of development prior. The new concept of the tractor was very fresh, and the term was first seen in one of their advertisements in the early 1900s.

By World War I, the tractor had cut through society and found its place as a farming staple. The United States Holt tractor was one of the inspirations for the tanks used by the French and British during the war. As a crawler-type tread tractor, it was hailed for its ability to navigate difficult weather conditions including rain and mud.

Tractors in modern farming have a multitude of functions within agriculture. Tractors are used to pull Harrows - large farm implements used to pulverize soil into much smaller and refined particles, break up previous traces of crops, remove weeds and cover seeds.

As well as preparing land to be sown, tractors are also used to plant seeds and sow crops, as well as supporting the lifecycle of crop growth through spreading fertilizers and sprayers for irrigation and pesticides. Finally, tractors are also used for the harvesting of crops, towing a vast amount of specialized tools to increase efficiency and meet the demand even in today's changeable climate and rising population.

Unsurprisingly, the tractor is one of the most essential foundations of farming, and can be found from the smallest to the biggest of farms.

Agriculture has been around for some 12,000 years, so in the context of time, tractors are still a relatively new industry tool. Nonetheless, they have come a long way in a very short amount of time. Within the last 25 years alone, the industry has seen huge advancements in tractor technology and function. This can be explored in detail through the Tractor of the Year website, which maps tractor development from 1998 to date through their awards.

Construction and other industries

Often regarded as the farming staple, tractors are versatile and can also be used for construction and various areas within civil engineering. Being very efficient at pulling and pushing big weights, they are also used to mount accessories fit for construction rather than agriculture, for loading, excavating, lifting, material handling, and mining.

Here are some of the most widely-used tractors that are used in civil engineering:

Bulldozers are large tractors, with a large metal blade at the front used for pushing materials such as rubble, soil and rock during construction projects. They are typically low-velocity vehicles and as such, have caterpillar tracks rather than wheels (though some specialist OTR bulldozers do have wheels).

Excavators, commonly referred to as the classic digger, are another form of earth-moving tractors. They can attach equipment such as a boom, an arm, a bucket and a cab, allowing them greater digging capabilities. Excavators can have wheels or tracks and can rotate 360 degrees to enhance productivity and stability. They come in a range of sizes and their versatility makes them a popular choice

A backhoe loader, also commonly referred to as a digger, looks like a farmer's tractor mixed with an excavator and a bulldozer! They feature a shovel-bucket at the front and a backhoe at the back of the vehicle. Their primary purpose is for landscaping jobs such as digging, but because of their versatility, are used in a variety of tasks including construction works, paving roads, light transportation and small demolitions.

Autonomous tractors are a fascinating and very new style of a tractor. The ‘Tesla of tractors’, you could argue. They are designed with features much like other tractors, with high traction power (torque), but have integrated technology that allows them to be driverless and often autonomous. Currently, the price point of these vehicles inhibits them from being implemented in mainstream industry. However, they could play a role in sustainable farming practices in the future, allowing farms to cut down on manual labor and manpower.

Fun fact: the vehicles used at airports to move large airplanes are also tractors - Terminal Tractors - and show just how widespread the use of tractors are across multiple industries!

The future of tractors

With a strong global push for greater sustainability, it's likely that future developments in tractor production will have an environmental focus, in particular, looking at electric and emission-free vehicles. Further industry developments may also change the use cases of tractors, for example, sprayers may become altogether obsolete with the rising use of drones to distribute pesticides and fertilizers. Industry leaders such as John Deere are also paving the way for more automation within their vehicles, implementing AI technologies to reduce the manual labor currently used in farming.

Whatever the use case, reliable and purpose-made tires will help you to get the most out of your advanced farming, construction, and civil engineering equipment. To assist you with sourcing the right tires for your needs, we’ve designed the BKT website to help users explore tires based on performance criteria and functionality. 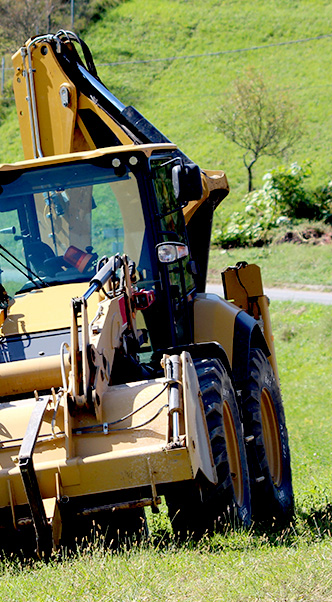