When you think of a farmer, what first comes to mind? Do you picture a man in denim overalls, sporting a straw hat? Often when we think of farming and agriculture, it is easy to picture the male stereotype.

This is unsurprising, as agriculture is largely considered a male dominated industry. However, over the last several decades, women in agriculture have been breaking the mold and subverting gender stereotypes - making significant waves in the agricultural industry’s recent sustainable efforts, and leading the fight against global poverty.

Despite the patriarchal history of the industry, women in farming play a crucial role in agricultural and horticultural development and allied fields. Across the globe, they provide the food you love. The journey from farm to fork is a lot of work, from early hours of the day until late at night, and the extra innovation that passionate female farmers produce needs more spotlight.

Over half of women in farming face gender discrimination, and while the large majority are proud of what they do, they are certainly not free from challenges.

One UK based farmer, Mary Quicke, who runs a cheesemaking farm in Devon, explained her first insight of what it is like to be a woman in the farming industry. At an early conference in the 1980s, of the few thousand that were there, roughly three were women. She recalls one person saying that her father must be disappointed that none of her brothers were interested in running the farm - giving the disheartening impression that she was merely a second choice.

Fast forward to 2022, and female farmers are proving the doubters wrong. Catherine St Germans, co-founder of the famous Port Eliot festival, got together with a team of volunteers to create ‘Farms To Feed Us’: a document where farmers could sign up and showcase their food products - which was especially beneficial for the many who had no clue where their nearest farm was! In a lockdown where travel was limited and households were shielding, farmers used ‘Farms To Feed Us’ to move a surplus of produce, while locals used it to shop for those shielding.

St Germans claimed: “Two months into lockdown, three million people bought veg boxes or direct from farms for the very first time”. If it wasn’t for farmers like St Germans and Mary Quicke, that number could have been significantly smaller and awareness of local farms less known. Despite this, many think that farming is only done on a large scale - or is only done by men. This seems to be a common misconception. And It isn't just the UK where women in farming face challenges; this is a global issue.

St Germans claimed: “Two months into lockdown, three million people bought veg boxes or direct from farms for the very first time”. If it wasn’t for farmers like St Germans and Mary Quicke, that number could have been significantly smaller and awareness of local farms less known. Despite this, many think that farming is only done on a large scale - or is only done by men. This seems to be a common misconception. And It isn't just the UK where women in farming face challenges; this is a global issue.

Female farmers around the world

The Female Farmer Project is a multimedia documentary project, which chronicles the rise of women in agriculture worldwide - despite the challenges they have historically faced. Founded by writer, photographer and international speaker Audra Mulkern, this project provides a platform to female farmers across the globe, through photographic portraits, a podcast, a documentary film and a host of personal essays and real life stories, all of which have received international acclaim.

The Female Farmer documentary film depicts “a story that is long overdue to be told”. Predominantly through the lens of American history, this film promises to shine a light on the female farmers who were and are the backbone of the agricultural community, playing the dual role of farmer and homemaker. This film is currently in the process of being created, following a successful crowdfunding campaign.

Why is it so important that the story of female farmers is told? Well, according to the UN’s Food and Agriculture Organisation (FAO), 43% of the global agriculture labour force are women, and they experience prejudice in multifarious forms: land and livestock ownership, equal pay, participation in decision-making entities and access to credit and financial services. This contributes to why women are producing a third less than their male counterparts, even though it is clear that they are every bit as productive. What’s more, the FAO believes that if we rid the agricultural industry of gender obstacles, we could feed 150 million more people.

The FAO aims to combat these types of prejudice by ensuring that government policies promote gender equality, subsequently empowering women with entrepreneurial and business planning skills to make them more independent and capable to participate - and thrive in - the local economy.

Working towards a fairer future

Here at BKT, we aspire to the same. We believe that companies should do their part to inspire and educate the next generation. With the COP26 targets, this is evermore important and necessary.

Our ‘Campus to Corporate’ is designed to to equip one hundred young students every year in core skills within technology, production, engineering, marketing, HR, and commercial. But, how is this benefiting female farmers specifically? Well, we are in the process of planning outreach initiatives to engage more women interns and employees in the coming years, to ensure equal opportunities for all and working towards a fully female-empowered industry.

To learn more about women in agriculture watch our ‘Women In Agriculture’ Global Trends episode here. We go deeper in detail on how women are the backbone of rural communities and more on the challenges they face, with guest speakers Svetla Garbeshkova, Audra Mulkern, Rekha Mehra and Lucia Salmaso, who have wide-ranging discussions about the topic. 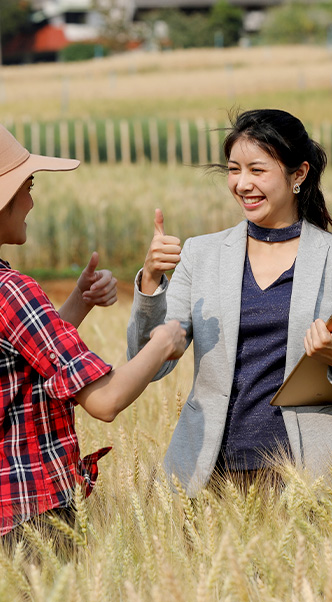