Dear friends, today we are going to tell you a very exciting story about Iya Traoré, the king of football freestyle. Iya is an extraordinary champion who is very popular through out France and has many enthusiastic fans in the rest of the world. His spectacular performance in some of the most gorgeous and evocative locations of the city center has charmed the audience in Paris. He has actually become an idol for old and young, casting a spell by means of his extraordinary skills while controlling the ball with his feet.

Sure, you’re keen on knowing more about the king of football freestyle! Let’s find out where his love for football comes from along with his outstanding talent!

A true champion’s history and origins

Iya Traoré was born in a small village in Guinea. His passion for the world of football blossoms soon. So, he moved to the capital city to follow his dreams when he was just ten years old. There he starts playing in the streets of the city and sets up a football team with his friends living in the same block - a team he will then be training for several years.

His short and brilliant career as a professional football player starts in France in 2000 where he plays in some of the top clubs like Paris Saint-Germain. After this experience, Iya starts dribbling with the ball inventing breathtaking stunts and brilliant tricks. He performs an infinite number of variations to astonish and thrill his fans all over Paris.

Metro stations, shopping centers and the most famous “rues” of the capital city from the Champs Elysées to Trocadéro become his stage. And it is there, where he performs unbelievable tricks, rising on the highest parapets, controlling the ball with his head, feet and back and leaving his audience literally gobsmacked. Thanks to his  outstanding talent, Traoré has been invited to some of the most popular TV shows in France. He has also be recorded three times in the Guiness Book of Records for his extraordinary performance as top football freestyler.

For some time past and in the future, Iya’s fans have already had and will again have the opportunity to appreciate their idol performing breathtaking tricks at all our trade shows. The only thing you need to do is to wait for the next chance to enjoy a new and jaw-dropping performance of the king of football freestyle with BKT! 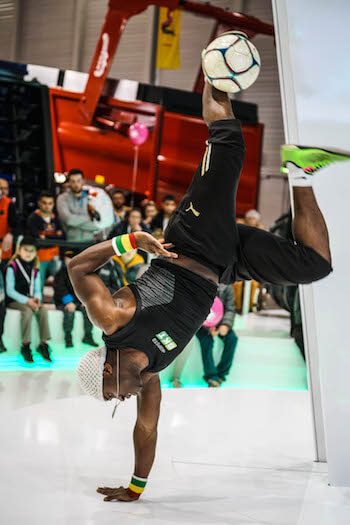